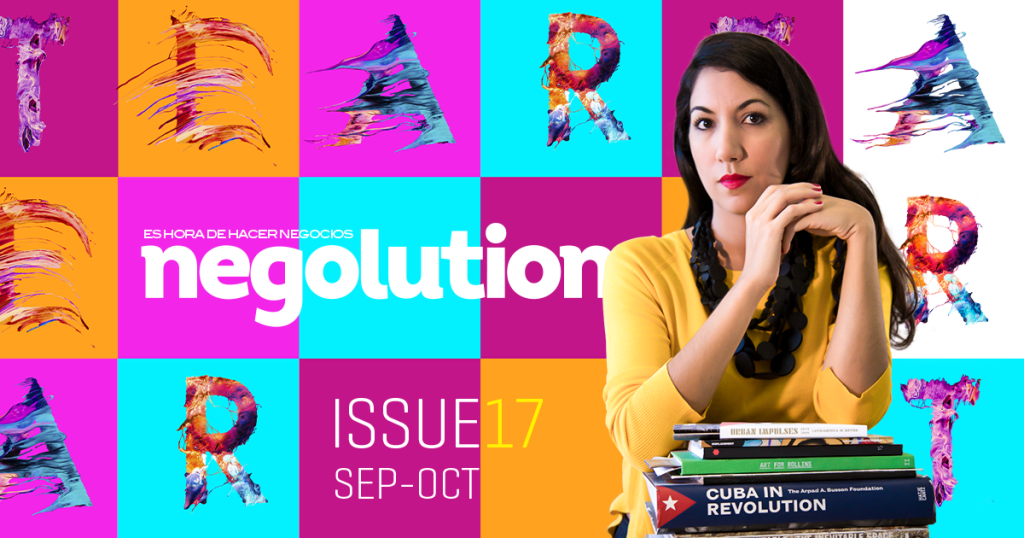 PASSION FOR THE RISK OF ART

Born in a home full of artworks and having grown up admiring paintings and photographs, Cristina Figueroa Vives has an unlimited passion for culture, is enthused when speaking about it, and has an immense desire to create something appealing and refreshing in a world in which it appears everything has already been said.

“She has earned respect for her talent, attitude, culture, intelligence and responsibility,” reads an article I found on this young woman, which defines her very well since she puts her all into every task she performs – from art curation, cultural promotion, her work at the Casa de las Américas, to leading of one of the most important and prestigious independent art galleries in Havana.

Together with her parents, renowned photographer José Alberto Figueroa and curator Cristina Vives, she runs the Estudio Figueroa-Vives. This is a family project that emerged in the mid-1990s from the desire to tell their own stories, and with which the family turned their home into a space where they “removed all the furniture and hung artworks, began to invite artists, generate exhibitions, books and knowledge,” she says.

How and why did you create this independent gallery project?

“There came a time when we realized that we had been working with contemporary art and its creators, undertaking research, organizing exhibitions and projects inside and outside Cuba, publishing books, somehow representing the work of artists for many years; all that without having defined what we were. We considered this more formally in 2014, but without forcing anything; it’s something that already existed and we decided to give it a name, coherence.”

The studio is hidden inside a house in El Vedado. Cristina confesses that, despite being referenced in the recommendations of museums and cultural travel agencies, “We like the idea of being discovered, that’s why we continue like this. On an architectural level this is a house, even the kitchen works as such; we put up works of art, but it is functional. This is an experience, because those who visit us are not entering a business, but the reality of people who have devoted their lives to art.”

Is it possible to be an art entrepreneur in Cuba, outside official institutions?

“Totally. The biggest proof is the fact that we exist and we are not the only ones. There are other projects that are appearing and growing, with different approaches and interests. Each thing that arises must be different, to cover those gaps that were previously only in the hands of institutions, and have now been opened up to some extent. Entrepreneurship in our field is still one of the most difficult types; we have to contend with those gaps in the law that allow us to exist. In our favor are the creative freedom and rights of artists, because they can communicate anything with their work, display it wherever they want, sell it; and those laws on protection of the artist and copyright in the country also apply to us. But like anything in Cuba, without knowing exactly how far you can go, and risking it.”

How do you rate the growth of this space? Is it possible to make it a profitable business?

“Often art and profitability do not go hand in hand, because to be profitable, you either have to be an artist who paints what the market is looking for, or one who has managed to establish themselves without betraying their values; two very complicated extremes. In our case, we work with a lot of experimental art, more complicated, thought-provoking, with a lot of installation pieces and creators that work with materials that are later taken apart; so regarding profitability, I do not see it so much from the economic point of view, as from the prestige that our name earns, the collaborations with international museums or appearing in important newspapers. Often the capital invested in organizing an exhibition comes from other work we do, talks or conferences, writing texts or curatorship rights; but that is the risk of art. “

Estudio Figueroa-Vives seeks to ensure that each visitor leaves having learned something, understands the pictures and photographs they see and the history behind them, whether from a conceptual, socio-political, contextual or critical analysis, appropriating the perceptiveness of the artists, who work with images to generate ideas.

What is it like to talk about Cuba in this gallery, through these different voices and styles?

“This studio is made up of three people with different views on art, and somehow that means that when we sit down as a family to brainstorm ideas each brings diverse proposals and interests; and we negotiate and combine them. Operating within these stylistic and generational positions provokes much more dialogue and confrontation, which is usually how we produce the best projects, because when we all agree it’s too easy, and we go back to the drawing board. ”

As part of your professional development, you have had the guidance and prestige of your parents, but what have you acquired from them and what have you yourself contributed on this path?

“I have a specific interest in more contemporary art, which is constantly fed by new technologies – in how we can get a more classic artist to engage with a more experimental one, commit to the latter, or organize an exhibition in a traditional space with entrepreneurs who contribute to and represent Cuban culture. I have the legacy of my parents, but I am putting in their hands the vision of the future, and also the certainty of continuity – that this is a project that will always be linked to the most innovative trends.”

What is Cristina lacking as an entrepreneur committed to Cuba?

“I think I lack a lot of knowledge, experience and more guts, that will come with time; but fundamentally I have to continue studying my space, where I am, what I can do, how I can continue offering something new, how to ensure we are not simply seen as an art gallery. For me the greatest satisfaction with this project will come when people say how much they have learned, that this has been a totally different, enriching experience and where they have seen Cuban art for the first time. ”

Proud to be able to sow in her country and her project every drop of knowledge she acquires across borders, Cristina prefers to be a big fish in a small pond as long she has the opportunity to work creatively. She claims she is a person with many doubts and at the same time she constantly poses herself new challenges. She doesn’t seek to feel comfortable or at ease in the spaces where she works because – and this is what fascinates her – it means she has take many more risks.