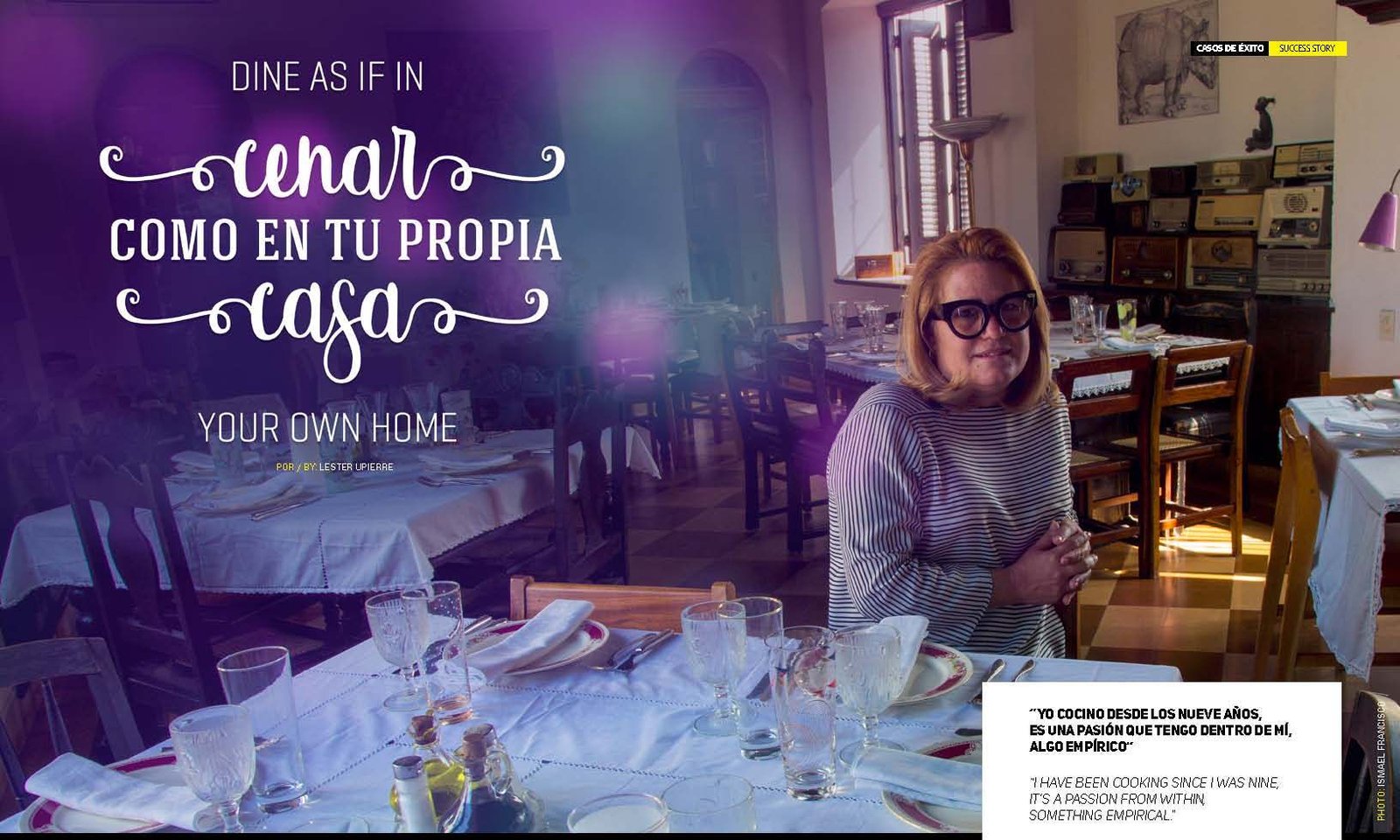 Dine as if in your own home

Atelier restaurant occupies a big colonial house in Havana’s El Vedado neighborhood, offering an atmosphere the likes of which I had never seen before. Paintings of diverse styles and formats, vintage radios, lamps and figurines, are scattered throughout the dining room; its tables like television images of another era. Its magical charm invites one to dine here and feel at home.

In the midst of all this is Niuris Higueras, a Cuban woman whose interest in the culinary arts was sparked as a child, and who confesses that she enjoys cooking because she enjoys eating. “I have been cooking since I was nine, it’s a passion from within, something empirical.” Niuris developed her gift thanks to the lessons of an old lady who lived next door and made delicious food. “So while my friends were playing in the street, I would go round to hers and learn how to make tomato jelly, rice pudding, flan, croquettes, stuffed potatoes, rice and beans. Then I would go home and teach my mom.”

Restoring the premises was no easy task, but since its opening in 2010, the strategy has been very clear. Its name encompasses a fundamental purpose: “What we want to achieve is a school, a cooking, gastronomy and services workshop; that’s why we called it Atelier, since in French it translates what we want it to be – a workshop of many things,” Niuris explains. The restaurant’s distinct theme began as a solution to certain needs, but then became the heart and soul of the establishment, something enjoyed by all its visitors, “as they discover things they had in their own homes as children, like the crockery or glasses, and that reunites you with your past and sparks pleasant memories.”

Coupled with a service style that respects diners’ space, is signature cuisine that is not held back by a frequent lack of supplies. Niuris uses such obstacles to innovate and grow, respecting both the product and those in the know. Likewise, Atelier has been described as a culinary experimentation workshop, due to its social work. “It’s a workshop in which we usually teach a small number of students from a cooking school in the municipality, and my doors are almost always open to anyone who approaches us and asks to learn, even if I can’t offer them a certificate of their skills,” Niuris notes.

Atelier’s philosophy of making diners feel at home would be impossible without Niuris’ family forming part of the team. As team leader, she prefers to always work on the basis of consensus and instruction, rather than imposing her own view, which is what makes the difference. “If it wasn’t for them, I wouldn’t have this. You can’t do anything in life on your own, you always need a work team to respond to you, but that team needs to feel useful, loved and valued, as well as having opportunities to grow.”

Niuris’ aspiration for Atelier’s present and future is to constantly welcome diners and be busy, and in order to achieve this she infects all with her love for what she does. “I believe that to do anything in life, even if it is for economic gain, you have to first seek the spiritual gain, and I love this; I love my restaurant, my employees, and that is what we convey.” Such is the case that she prefers to avoid making use of the many celebrities who have visited Atelier to her own benefit, or to make the restaurant more of an attraction.

Her recipe when faced with common difficulties on doing business in our country consists of three ingredients: creativity, imagination and intelligence. “Cubans have a very high IQ and culture, and these are all strengths we have to move forward. When you have everything, you don’t realize how creative you can be.”

Success doesn’t just come through desire. For Niuris, “Anyone who is ready to do business has to think about it, as it requires responsibility, perseverance, effort, but above all, passion. If you don’t have a passion for what you are going to do, it doesn’t work. You can’t start a business thinking that you have money and want to do something to keep yourself occupied.” The real secret is enjoying doing what you are passionate about.